Portability: Starlink now offers "Portability", which allows the Starlink account to maintain its service address, while being able to connect anywhere within the continent which the account resides. In turn, this means you can provide Celona network coverage just about anywhere you can obtain clear sky view.

Ethernet adapter: Starlink now allows for the purchase of an ethernet adapter, which connects into the base station. Now you can connect your Celona Edge and Starlink to the same ethernet access switch without any need for a WAN over WiFi bridge.

Starlink utilizes earth spanning low orbit satellites to provide lower latency communications compared to what has been possible so far with traditional satellite-based wide area networking (WAN). As Starlink increases the number of its satellites in orbit, the capacity and coverage will continue to increase.

On the ground, Celona can utilize Starlink as its WAN / internet backhaul in temporary work sites, rural areas and many other locations that do not have strong internet connectivity today.

Same internet backhaul would offer reliable connectivity between our on-premises Celona Access Points and Celona Edge infrastructure - and the cloud-hosted Celona Orchestrator operations console along with the private spectrum coordination / access services (such as SAS for the CBRS spectrum in the US).

At our interoperability site, we set up a Celona network with Starlink as the internet backhaul based on this topology:

The Celona Edge represents the enterprise onramp for clients behind Celona Access points. While Celona Edge can be deployed before the WAN (Starlink in this case), Celona Edge can alternatively be deployed remotely in AWS or your remote site for simplified, secure routing next to your application servers as well. As is the case in the network diagram below.

The following is the process we used to connect Celona through Starlink.

Note: This step only needs to be done for initial setup. Afterwards, the only configuration step on power-up that might be necessary would be to change your location details in your Starlink in case you change locations.

Unboxing Starlink and starting up 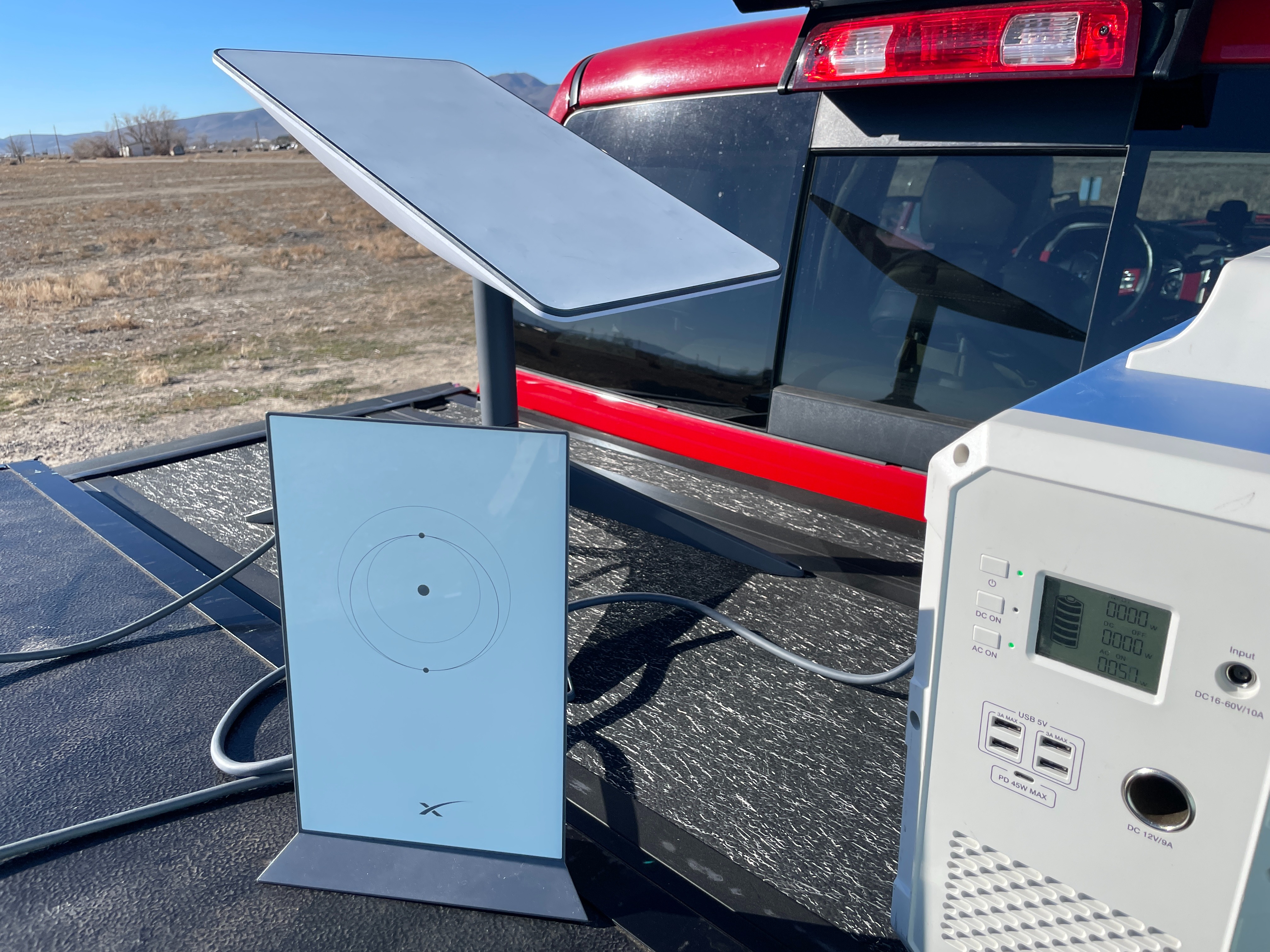 Connect to the Starlink Wi-Fi

We used an Apple iPhone 12 Pro to connect to the STARLINK Wi-Fi. No password is needed. 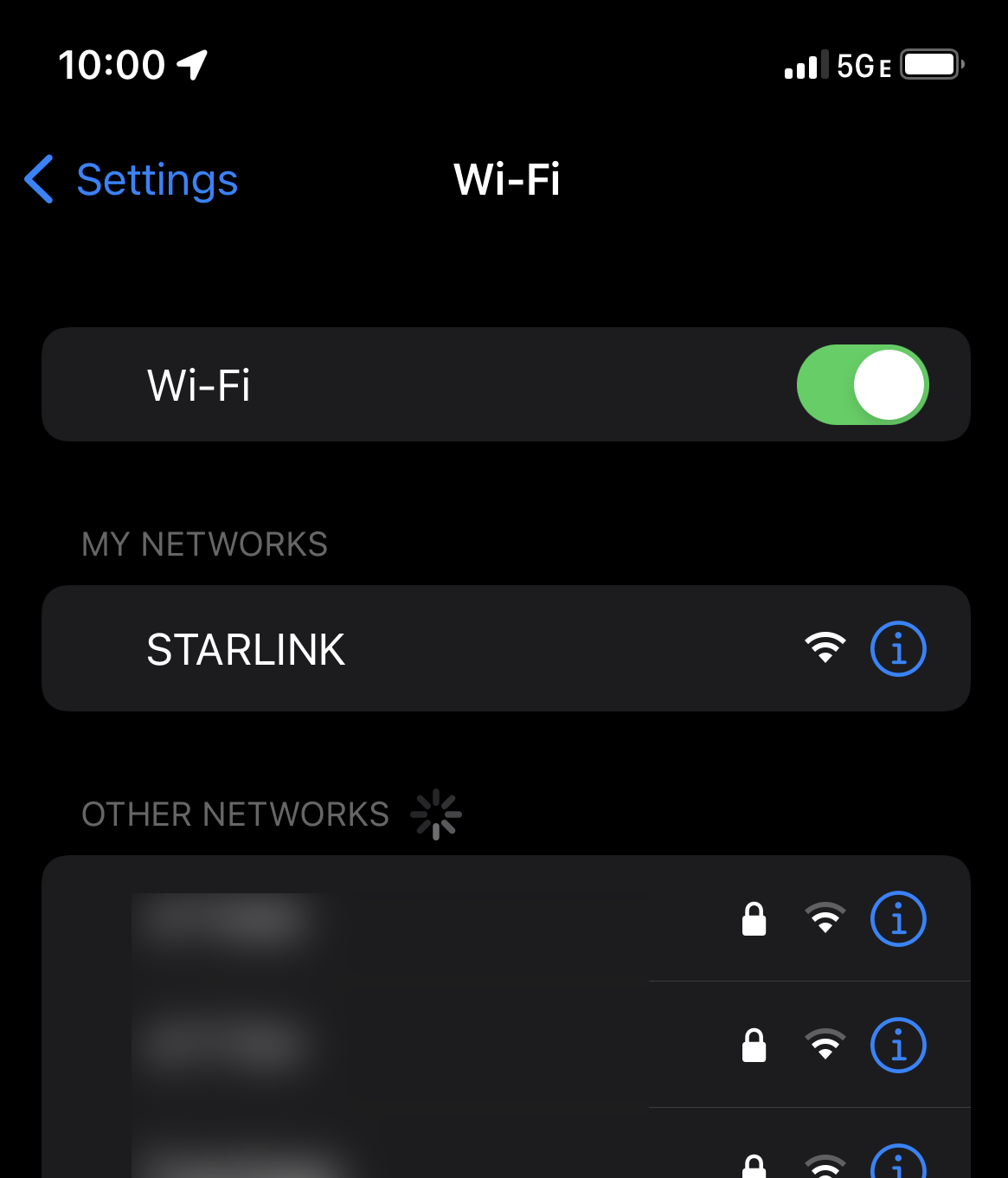 On the iPhone 12 Pro, as soon as you connect to the STARLINK Wi-Fi, a browser window will pop up. Name your Starlink Wi-Fi network, which would be the new SSID replacing the initial STARLINK identifier.

Note: if you Cancel, you will be disconnected from the STARLINK Wi-Fi network.

After creating your new Wi-Fi SSID, connect with your new password. Your Starlink is now ready to accept local Wi-Fi connections from your devices.

Next, let's make sure that you have internet connectivity via Starlink. This time, let's connect a laptop via Wi-Fi to Starlink and confirm.

Configure Wi-Fi over WAN with a gateway

The Starlink kit has no ethernet ports and client devices can only connect via Wi-Fi. This requires us to utilize a gateway device that has "WAN over Wi-Fi" capability to route local area network connections through that Wi-Fi uplink. In our interoperability lab, we used a Cradlepoint R500-PLTE router for this purpose.

To configure WAN over Wi-Fi capability on the R500, connect your laptop to its LAN Ethernet interface. After logging in, in the R500 web user interface, navigate to NETWORKING > WiFi as WAN or Client. 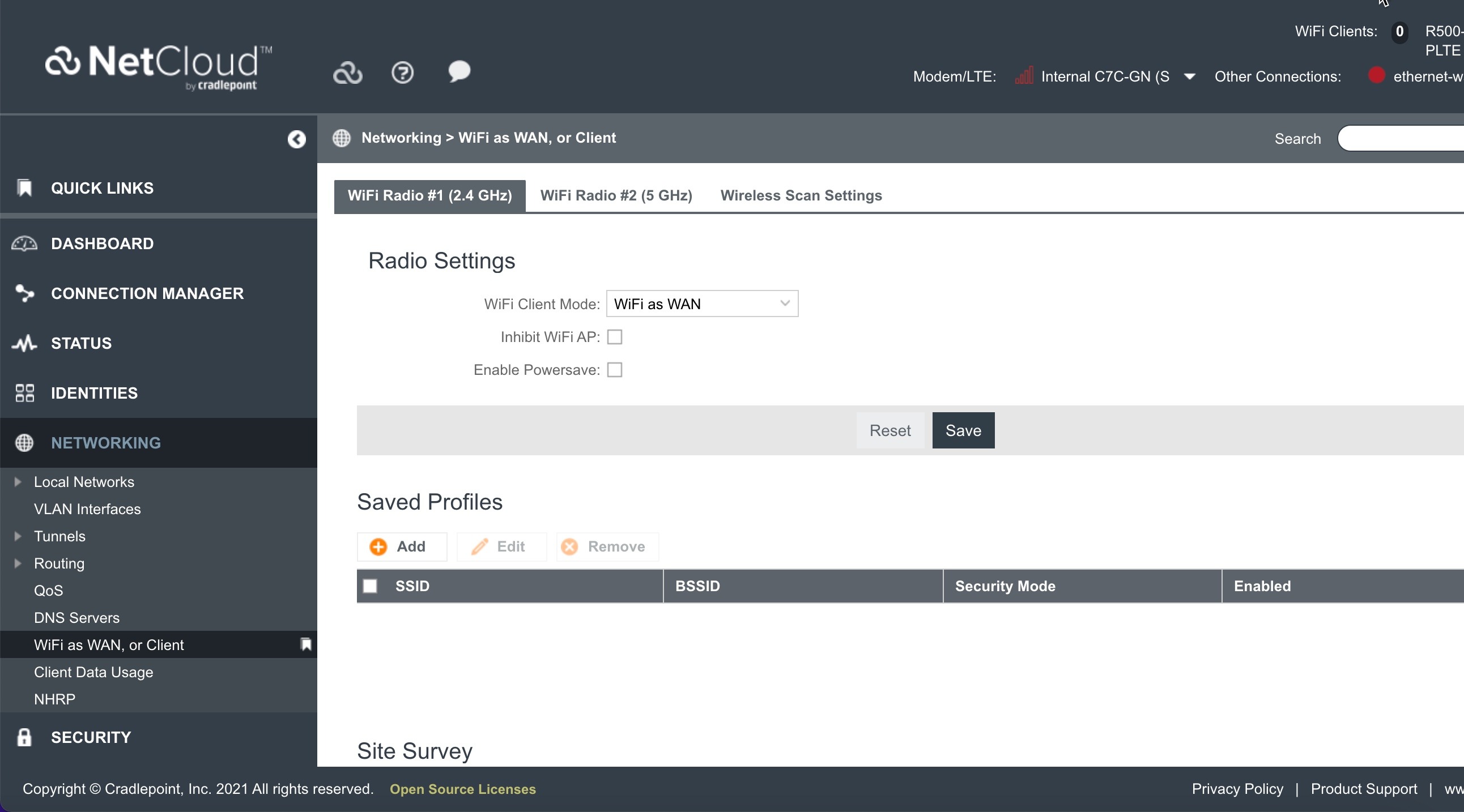 In our lab, we selected the WiFi Radio #2 (5 GHz) tab. Scroll down to Site Survey and click on Refresh. In a few seconds, the list of detected Wi-Fi networks will refresh. Select and Import the Wi-Fi network that you configured in Starlink. 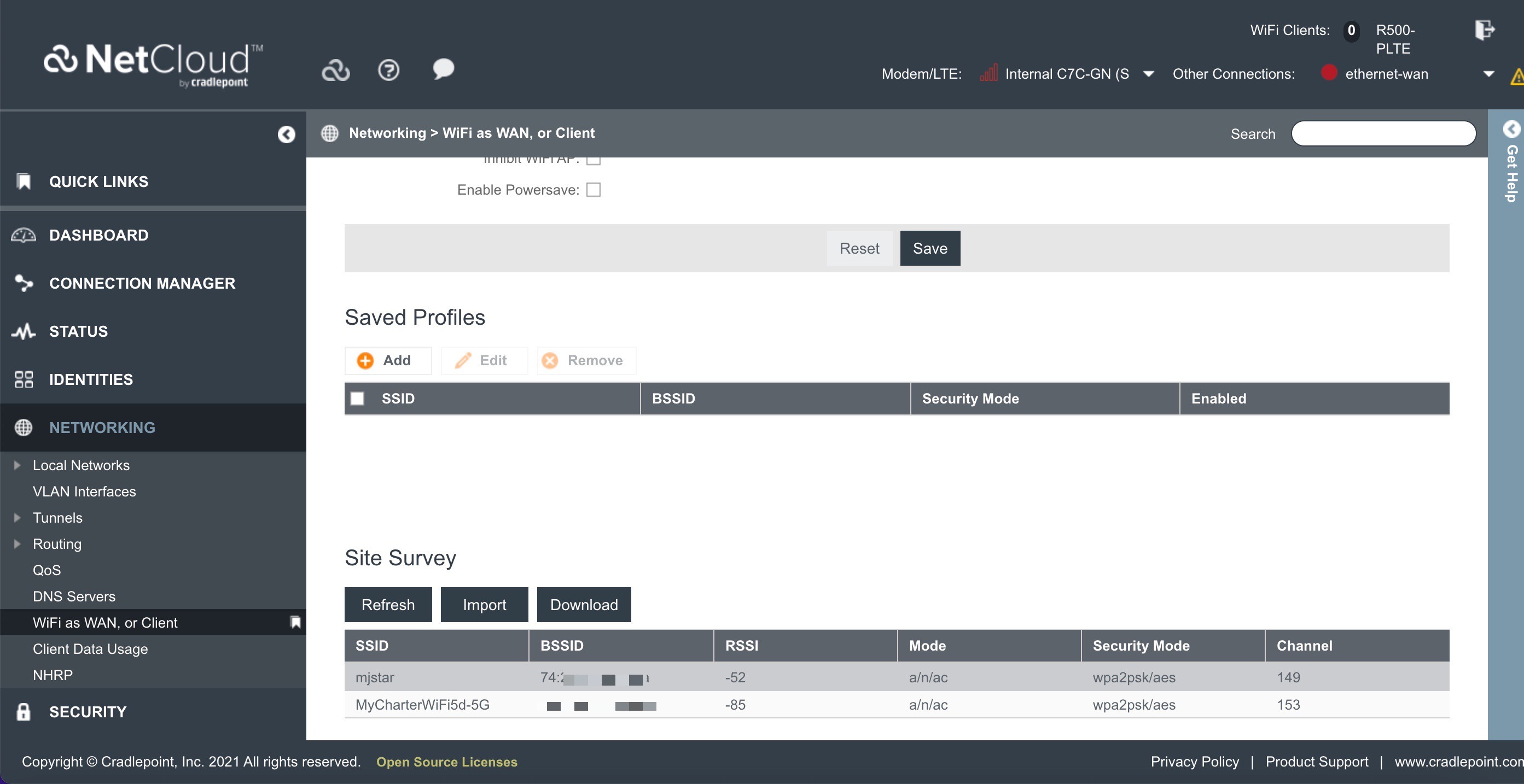 You should see the Starlink network listed in Saved Profiles. Edit that profile and add the Wi-Fi password that you configured in Starlink. Save the updated profile. 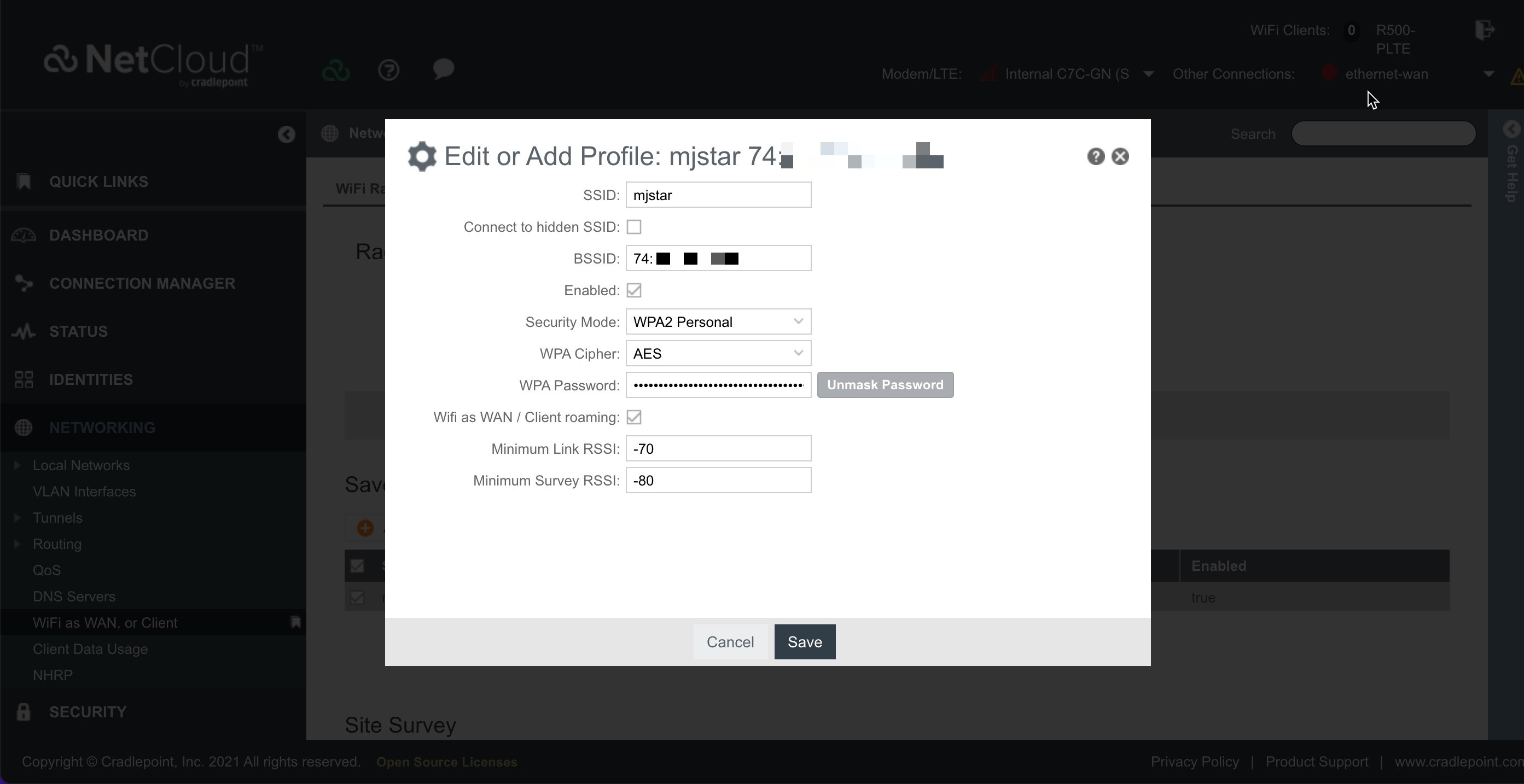 It will take a few minutes for the R500 to connect to Starlink over Wi-Fi. Verify internet connectivity via your laptop that's still connected via Ethernet to the R500.

Connect the Gateway and Celona to a common Ethernet network

Note: An extra Ethernet switch won't be required if you use a WAN router such as Cradlepoint with more than one LAN Ethernet interface. For instance, the Cradlepoint E3000 Enterprise Router.

Onboard a client device to the Celona network

In our lab, we used a physical SIM in an Apple iPhone 12 Pro device to connect to the Celona network. A performance test with the nPerf application showed 116Mbps download throughput with 4Mbps upload. 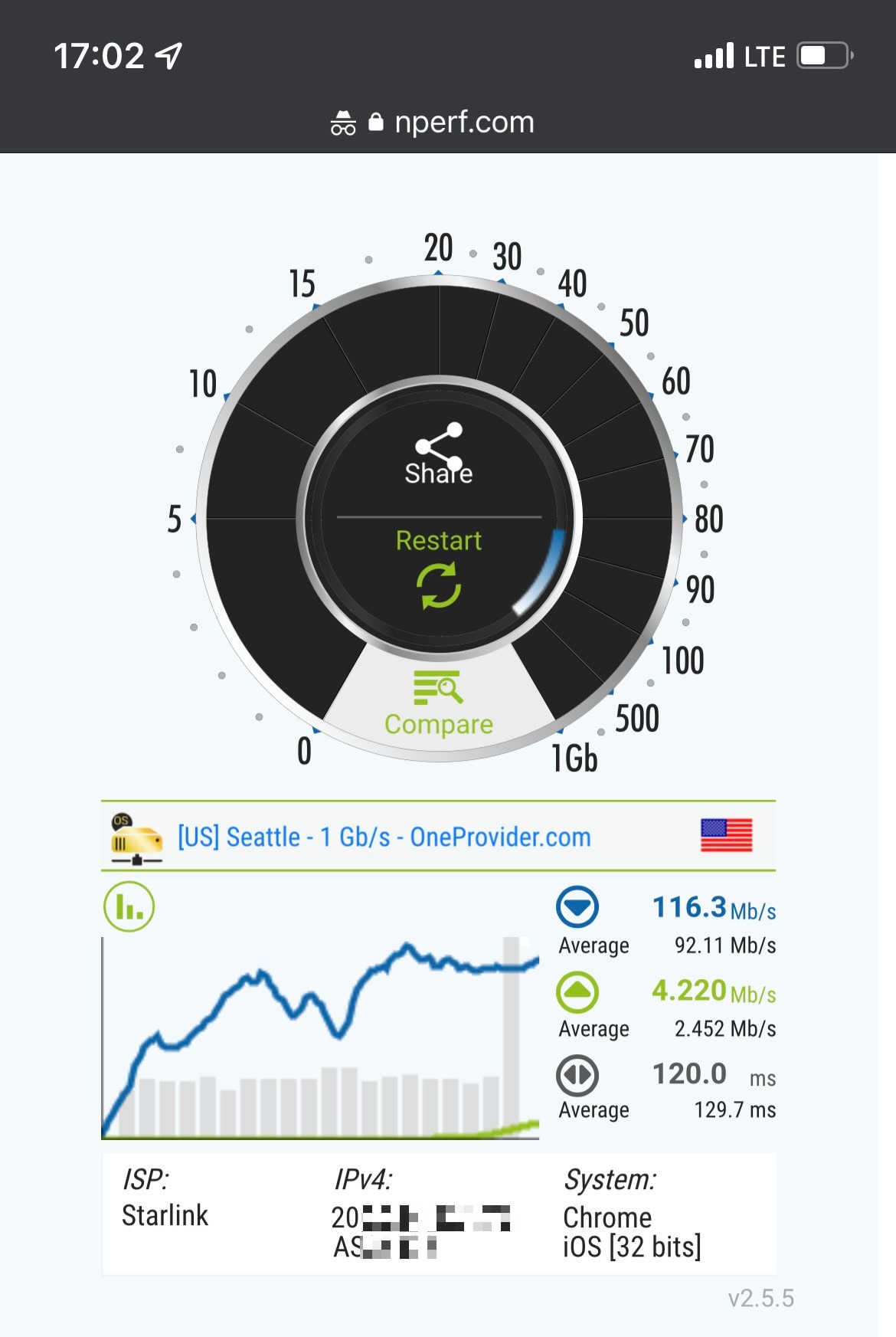 To see the Celona network in action on a Startlink WAN backhaul, feel free to request a custom demo here.